Loosening up: Werner Drewes and the Bauhaus School 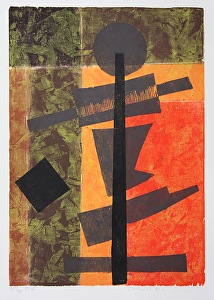 The German Bauhaus school was by many accounts the most influential modernist art school of the 20th century, one whose “radical approach to art in all its forms” made it “a philosophical center comparable to the Garden of Epicurus,” according to Tom Wolfe in From Bauhaus to Our House (1981).

Today, on the eve of the school’s 100th anniversary, it’s difficult to find a corner of design, architecture, or the arts that doesn’t bear its traces.

In the United States, its significance spread due to the influence of Werner Drewes, painter, printmaker, teacher, and graduate of the Bauhaus diaspora.

Born in Germany in 1899, Drewes was admitted to the Bauhaus in Weimar in 1921, studying under artists including Paul Klee, Johannes Itten, and Georg Muche.

“It was more of a loosening up … to forget all you had learned before, stylistically and technically, and to use fresh eyes and real new naive approach,” he said in a series of interviews with Martina Norelli, then associate curator of Graphic Arts at the Smithsonian American Art Museum, in 1983-84.

Then in the early 1920s, he traveled extensively in Europe, North America, and Asia to study old masters, selling an occasional print or commissioned piece. He was readmitted to the Bauhaus schools’ Dessau location in 1927, studying printmaking with Lyonel Feininger, graphics with László Moholy- Nagy, and painting with Wassily Kandinsky.

When abstract artistic expression became increasingly restrictive under Hitler, Drewes moved to New York City. Teaching printmaking at the Brooklyn Museum under the Federal Art Project and Columbia University, his con- trolled abstractions evoked architecture and household objects. He worked in a variety of mediums including oil, intaglio, collage, gouache, and dis- covered a true knack and love for his renown woodcuts.

“You are really moving forward,” Kandinsky wrote him in 1933, the year Hitler closed the Bauhaus. “Your wrist has become looser, which is naturally the result of your developing inner freedom.” Drewes ultimately turned towards complete abstraction, drawing heavily from his instruction by Kandinsky.

Drewes became a US citizen in 1936. In 1937, he and Bauhaus artists, including Piet Mondrian and Lyonel Feininger, founded the American Abstract Artists group, the first formal organization in the US devoted to non- objective art. He exhibited at the Museum of Modern Art and elsewhere. 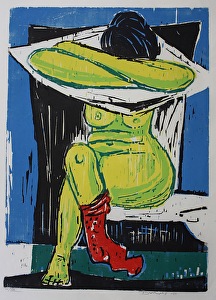 In 1944 and 1945 Drewes worked at Stanley William Hayter’s Atelier 17, where he first experimented with color printmaking; the two are often credited with improving the color intaglio technique.

A tenured position at Washington University in St. Louis came a year later, where he fine-tuned his interpretation of the Bauhaus aesthetic with unique printmaking techniques, a daring use of color, and woodcuts. He retired from the university in 1965.

Numerous solo traveling exhibitions followed in the US, Turkey, Latin America, and Germany. In 1985, the Smithsonian American Art Museum held a large solo retrospective – “65 Years of Printmaking” – dedicated to his etchings, drypoints, lithographs, celloprints, and multi-plate color and black and white woodcuts.

Werner ultimately settled in Reston, Virginia, where he continued teaching, showing collaging and printing at Loudoun College. “To the very end, he cut his multiple-plate color woodcuts, rubbed his prints by hand with a stylus, and added stylistic innovations,” said Karen Seibert, the artist’s granddaughter.

Today, museums and galleries from coast to coast continue to exhibit Drewes’ work. An exhibition commemorating Drewes’ role in the Bauhaus will be held this fall at Gallery B in Bethesda, Maryland (November 6-December 2), with lectures taking place throughout the month.

Werner Drewes Retrospective: An interview with the artist’s granddaughter